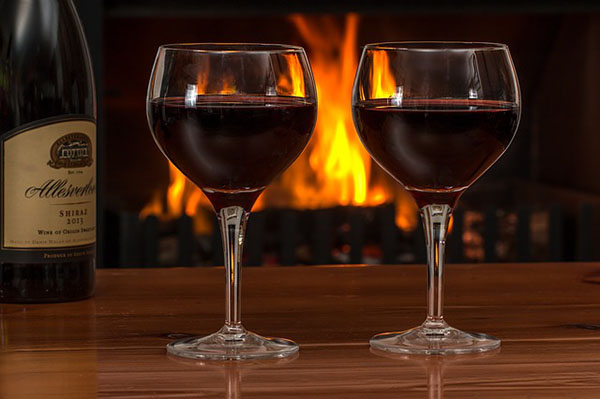 I had a premonition that to buy wine in Lyon would be a different experience. And I was not let down. With ample time to spare, I searched Internet for wine shops in Lyon. With a couple of leads written down in my hunt for a good bottle of red, I knew there would be a wine shop directly on my left, as I had a vague notion of the store window after having passed it several times during my stay in the city. But upon entering the store, it did not take long before I realized that wine is considered serious business in this country of culinary art.

The entire store was furnished very much like you would imagine the inner depths of an old 18th century sailing ship, with caskets and compact wooden shelves, stacked with wine bottles in neat rows. The difference was that this room, for the store was comprised in but a single room, had high walls which had been used to maximum effect. In this setting, with the afternoon sun shining in between plants lining the store window, I let my eyes feast on the red, white and yellow reflections from bottles all around me.

The room was entirely decorated with wooden furniture which added a genuine touch to everything. No plastic furniture or commercial posters was to be seen anywhere in the shop. It was absolutely crammed full of wine bottles by the walls, floor to roof, and the only space available were narrow corridors between the lower shelves in the middle of the room. It was as if I was looking into a treasure cove of bottles, surrounded by high shelves at the walls.I was completely surprised when my eyes glanced over to the shop keeper. Here we have a wine store, picked from tales of wonder, and the person in charge is a man with black trousers, a white shirt (buttoned all the way up, mind you), also wearing a slim, black vest. Voíla!

Of course I consulted the man, this is the appropriate word, because he was trained in the art of wines and to neglect that fact is a sin in France, as to what wine I should acquire for dinner of Moussaka.
‘Ehm.’ he answered with a deep frown, only giving me the shortest of glances, while letting his alert eyes fixate on a shelf with bottles here, and a casket of bottles there. Deep in thought he walked over to a shelf by the remote wall in the shop, let his eyes glance over the bottles before beckoning me to come over and join him. A few seconds passed by as he actually seemed to ponder upon the bottle labels in front of us.
It was clear to me at that time that I was about to learn something about wines. There were no simplistic labels beneath a shelf with bottles saying “good with pasta”. Instead this man served as the guide, treating the choice of wine a fine art served as a navigator in the labyrinth of wine bottles.
At such an encounter, you should be amazed. I thought I would just pop in, buy myself a bottle of red, and trail my way back home to the awaiting kitchen. Oh no.
My calm guide walked back from the shelf with bottles, to a small table, looked me straight in the eyes and remarked
‘You will cook Moussaka. With meat, no?’
‘With meat, yeah’
‘Then, something spicy. I recommend… ‘ his voice reached a high pitched as a magician who is just about to do a trick, but instead, he pulled up a bottle, presenting the etiquette to me.
‘Anjou’. Now, I don’t want to be a pest here, but that was exactly the same wine that my dinner guest whom I was to cook for, had earlier suggested. I was dumbfounded.
‘Are you sure?’
I would pay money to see the face he made at me. A few short syllables in French, then a few well picked words
‘The spicyness is good. It works with meat. For Moussaka, yes.’

You simply don’t argue with the master.

As I fumbled with the backpack hanging carelessly from my shoulder, I was sure that never before had I experienced such a full and rich purchase of one bottle of wine. With a smile, a humble “Merci beaucoup”, I felt the bottle, weighed it in my hands, looked at the etiquette, understood quickly enough that I didn’t know what to look for, glanced up into his kind appearance (standing erect and with his hands straight by his sides), before I recoiled from my dumbfoundness. With a kind face and an expectant look in his eyes he simply waited for my reply, which led to my respect growing even more for this man. Not only had he made a true effort to pick a bottle of red to go with my Moussaka, but also he did it without any hint of superiority. The entire demeanour had a great effect and I gave in quickly enough, full of trust. Another “Merci beaucoup”, once more just to emphasize.

The friendliness this man showed me, the pure interest in the choice of wine for the dinner I would cook, was really something extraordinary. I recommend everyone to go through it at least once.
The wine? Oh it tasted great with Moussaka, though I have no idea which adjectives to describe the wine with. I leave that to the shop keeper, though I really sipped the wine in respect, remembering those shelves and the sparkling contents as the sun shone into the treasure cove, and the shop keeper’s professionalism was a fine touch to increasing the value of the wine.

Train adventure to Berlin and Prague.