See the Dolomites in Italy from above

Do you know these dazzling towns and cities? Try the puzzles..

Don’t miss out! 4 landmarks in France and Germany you have to see 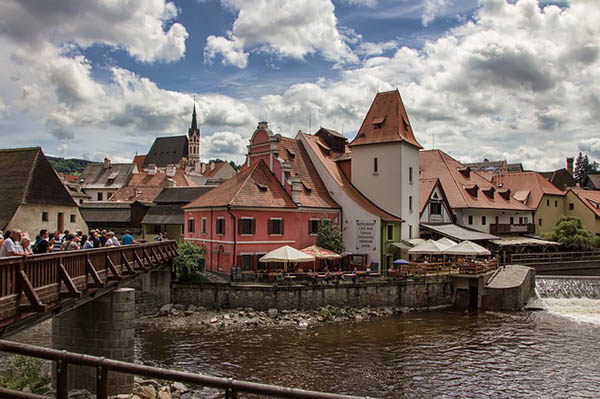 Hidden away in southern Bohemia we stumble upon Český Krumlov. Though how you can so haphazardly find such remains from the Renaissance is a surprise. Český Krumlov is truly in the midst of Europe, only some 30 kilometres from Austria.

The train trip from Prague was not meant to take more than four hours, but due to railroad repairs we had to travel by bus a few kilometres and then switch to train further ahead. The Czech landscape passed by pretty fast even though our train ran at a lower speed. When we arrived in the early afternoon we were obliged to go with a bus around the outskirts of the village Český Krumlov, which seemed to be the pot of gold at the end of the rainbow. To get there simply was not meant as a simple excursion. Our expectations were fulfilled in an instant however, when the castle became visible between tree branches of the Blansko Forest and the Vltava river.

From a first glance, it is simple to understand why this location was chosen for a castle. While the village lies along the slopes, the castle towers above on two rock plateaus (now joined together by the castle construction).
The village is perfectly beaming vibes of old times, from Gothic to Renaissance. Český Krumlov is often directly associated with its castle, a remainder of Gothic times and rebuilt according to the changing times in Bohemian history.
It was quite a feat to avoid devastation during countless wars and uncertain times. In the not so distant history the village Český Krumlov has been ruled by the Austrian Empire, later incorporated into the dual monarchy Austro-Hungary. After World War I, the village became a short-lived possession of German Austria before it was captured by Czechoslovakian troops in 1918. In World War II it was annexed by German occupying forces whereafter it became one of the most southern landmarks of Communist Czechoslovakia. It would take until 1989 before the village and castle was restored and had a real renaissance as a historical landmark in Europe. Its status as a cultural heritage has been acknowledged by UNESCO, most plainly seen on the village square, where there is a plaque informing visitors that this is a UNESCO site since 1992. By all right.

This place is more than a historical site, it is an important piece of the puzzle of European history. Everything breathes history and countless twists and turns of history, alleys and renaissance walls are natural reminders but there are also restaurants, hostels and legends of people who have lived here.

Renaissance Influence
The castle tower is the mightiest of the castle structures. It stretches 86 metres into the air from the Vltava river and is colourful with its painted walls. It is both Gothic and Renaissance in style, with the construction starting in the beginning of the 13th century, some 500 years after the foundation of the castle (then a fortress).
The entire castle metamorphosed from its Gothic appearance into Renaissance style aided by the will and imagination of the 16th century architect Baldassare Maggi of Arogna. This Italian-born architect would later enhance the architecture of several castles throughout South Bohemia. Baldassare was employed by Wilhelm von Rosenberg and to reflect the influence of the latter, Baldassare designed the castle tower in the current style. The castle reaches high above the rooftops of this village. It runs far atop the rock outcrip and one is obliged to look sideways to see how the entire wall stretches along a long part of the water below. The river is as if cut to accommodate the exact needs and wants of the inhabitants. The river divides into one smaller stream one which runs between a few houses, resulting in a pretty view with a café placed right next to the water so to allow for listening to the water flowing by underneath. Not that it is a wild river, it’s more of a gentle simmering.

The most striking sight is the most ornamented building, also the oldest castle building and known as The Little Castle. It has a very rich Renaissance facade. Next to The Little Castle is the old belfry that gives the entire castle complex a distinctive outline.
The castle is not alone with its renaissance facades. Throughout the village there are several houses that bear direct traces of the same renaissance paintings on their walls.

Tunes from a Harpsichord
Because of the preservation of the village, there are few if any cars passing by in the streets. This enhances the experience of walking the winding streets and alleys. Even though there are tourists in Český Krumlov, it is nothing like the busy streets of Old Prague, where tourists are seen everywhere. Cesky Krumlov has been able to maintain a genuine medieval setting, even with its quite modern cafés and souvenir shops found around the city. Several of these are nearby the wooden bridge which connects the two village areas with each other.
Walking on the wooden bridge I suddenly hear the beginning of a tune from the movie Amelie Poulain, performed on an old harpsichord by a teenage girl. You would think that someone actually placed her there for effect. The small changes of rhythm and variations from the original tune simply enhance this effect. Good show indeed.