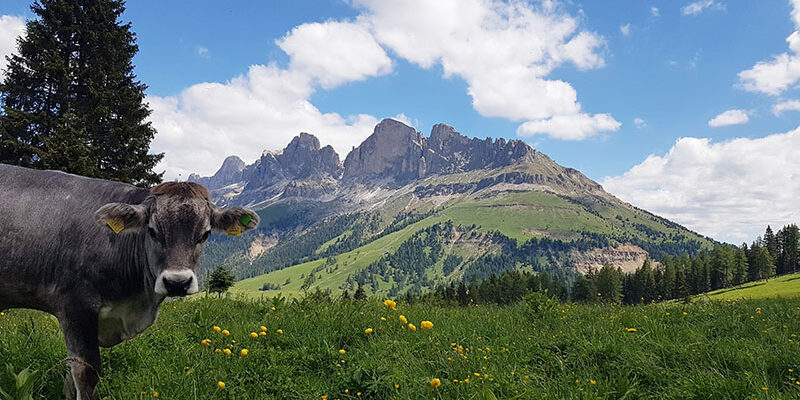 When you go to central Europe, right in-between Switzerland and Italy, you will find timeless nature retreats. This is the region where the languages derived from Latin meet the German language group. This is also where the Alpine nature finds its way to the Mediterranean Sea, with wineyards, small cozy Swiss and Italian villages lining the coast.

Let’s say you want to go hiking and biking with the backdrop of the Alps and the Mediterranean Sea or Adriatic Sea close by. Here we will take a brief look at Switzerland and the north of Italy.

Einsiedeln is in central Switzerland and close to both Zurich and Lucerne. You will find an old Benedictine monastery from the 10th century and the beginning of the Camino de Santiago trail. This trail is famous since many centuries back and follows an old Roman trade route and continues all the way to the Atlantic coast of Galicia. Of all the inspiring trails you could follow, this probably is in the top league, as it is mentioned in medieval records since the 9th century. The saying ‘a journey of a thousand miles begins with a single step’ is perfect for Einsiedeln.

Lucerne in Switzerland and the nature nearby

You can get to Lucerne from Zurich by train and it takes slightly less than an hour. Zurich is known as a financial capital in Europe. But what many are not aware of is the pristine nature literally an hour away with public transport. Imagine getting up early in the morning in Zurich, and taking a train to Lucerne, where you start can start the day with a walk up to Lindenhof which was once housing a Roman fortress. This park will give you a view of the city and spark some imagination for where to go next. The Limmat river flows below you and you can saunter down to the Old Town which has traditional houses lining the narrow streets. As you are ready to go hiking, the Blick auf Pilatus – Rundwanderung trail is a good start. You can reach the starting point in Schwarzenberg by public transport from Lucerne.

Rocca Pietore in the Belluno province

If you are eager on a hiking adventure in Italy, then Lombardy offers a combined bike and walking trail called Valtellina Pathway. It follows the river Adda and stretches from Colico to Bormio. It is slightly longer than 110 km and known for the clean nature and the pristine nature in the valley.

The bike trail Val Venosta is in Trentino-Alto Adige, Italy, and will take you through a dreamlike landscape with castles and along a street that replaced the Roman road Via Claudia Augusta.

These ideas are merely meant to wet your appetite for exploring the landscapes in Italy and Switzerland. They could be starting points – or the destination – as you put together your own hiking or biking path in Switzerland or north of Italy.