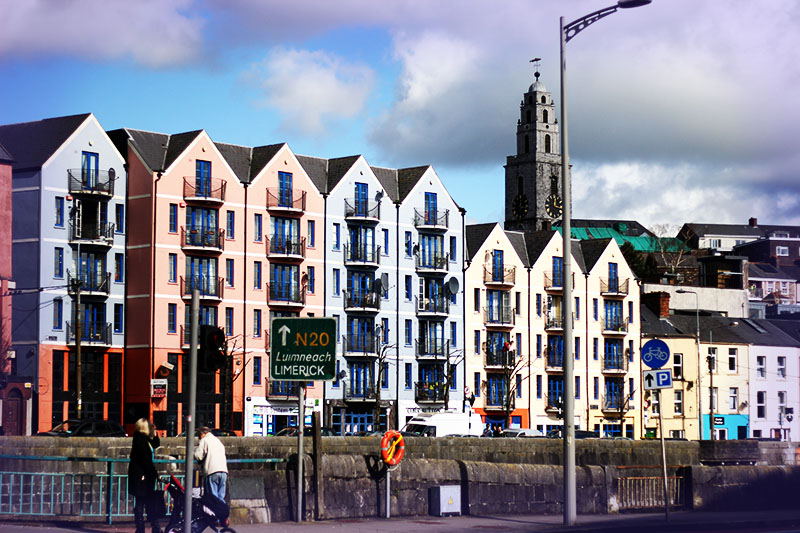 Cork has character. It’s obvious after a few hours of walking around in the centre. The River Lee divides the centre and is a great point to start exploring places such as The Old English Market on Princes Street. Add the old Medieval cathedrals to the mix and you have yourself a fine display of traces of many influences of European history. Cork began its journey into the history books in the 6th century as a monastery. When Vikings founded a trading community in the area that marked the beginning of Cork as a vital trading outpost in Europe. Situated on the very western edge of Europe this has been recognized again and again. To this day there are surnames in Cork and surroundings that can be traced to Norse origins.

The remains of turbulent times are scattered around the city but very noticeable when viewed close-up. Take for instance the Black Rock Castle and observatory, a remaining stronghold from the late 16th century. The tower was built in 1582 as protection from pirates approaching along River Lee and was built after the local population inquired Queen Elizabeth I to build the looming watchtower by the river.

The weather here is mild and changes frequently with the Atlantic ocean so closeby. Cork is one of the last pit stops before venturing out to other continents. This was also a very important provisions trade harbour during the Napoleonic Wars. The so called Cork Butter Market was a very strictly controlled system of quality control at the time and was renowned throughout the world. At the time Cork was the largest supplier of butter in the world. Now you may think that was an exceptional feat. But that and the textile industry, especially for creating sailcloth, moulded Cork into a popular trade hub. In 1726 this city was home to the world’s largest sailcloth manufacturer. But wait, in the late 1700s several other industries flourished here as well. Brewing, distilling and tanning were three large commercial activities. So you see, wherever you turn your attention, commerce and trade has left distinguishing marks. It’s amusing to say the least that so little is known abroad of this city’s manufacturing and trading history.

With plenty of migration over the centuries the city has a history of multicultural tendencies with Huguenots in the 17th century and African, Asian, and Eastern European communities in the 20th and 21st centuries. This is visible in the number of multicultural restaurants and the specialist shops for regional foods, such as spicy dishes from Eastern Europe and the Middle East. Although this city doesn’t cause a noticeable blip on the tourist radar in Europe, it has a vibrating nightlife and is surrounded by nature that is appreciated by mountainbikers and hikers alike. For those that don’t appreciate mountains and winding bike trails, then there are still options to go kayaking. In a nutshell, if you’re the sporty type that wants a bit of nightlife as well, Cork might just be the place to consider for your next long weekend.

But then why do I know so little about this city in the south of Ireland? A question well worth asking. Sure, Ireland is a bit out of the way and Cork even more so. Most people fly in to Dublin and stay in the Temple Bar area in the centre there. But from Cork airport you can fly to a number of large cities in Europe, such as in France and Germany to Spain and United Kingdom. This means that Cork is not as unreachable as one might be led to believe. Maybe another hint that there’s more to explore in Europe than we are usually led to believe in most city-hopping articles. Let’s just say you will find a different Ireland if you stray out of Dublin and travel around. I started my trip in Cork and honestly strained myself not to build up too much expectation. I simply knew to little to have any high hopes. But as I got a taxi from the airport I started chatting with the driver, a friendly guy from Nigeria who lives in the city since a decade. He described the Irish as chatty and outgoing and Cork as a place with a vibrant nightlife. Well at the hotel he was proven correct as me and my mate encountered a receptionist who spoke at 120 beats per minutes and had obvious issues with stopping to catch her breath. I almost patted her on the shoulder to tell her it’s all right, no need to give us a complete rundown of all the hotel facilities in less than 60 seconds flat. Yet, as for hospitality and good-humoured attitude, I could not ask for more.

The value of entertaining travel anecdotes

You can talk a lot and you can talk a lot to entertain those around you. This receptionist in her thirties knew the value of entertaining as she interjected odd comments about the hotel staff and the routines, such as “Don’t mind if the elevator takes ages in the morning, that’ll be Ben who’s busy moving things in preparation of breakfast.”
I thought this random chatter could be an exception although I remembered the cabbie’s words. The following day my belief in the jolly Irish banter was firmly cemented, or like the Irish call it, “having the craic”.

An act of friendly kindness goes such a long way

It just so happened that I forgot my eye lens fluid back home. So the first day in Cork I had to find an optician. Said and done. Well there I asked if they had a small bottle that would last me a few days. The response from the receptionist behind the counter was that they only sold those bottles in packs of three. That is too much for a one week trip, I decided, and politely declined. She then offered a free starter’s pack. Slightly stunned I offered to pay but she answered that it was not necessary. Instead she asked where I was from. There are a few takeaways from this simple act of kindness. First off it made me smile and I started a conversation about the interior design of the shop. And so her smile widened and soon we were having a friendly chat.
Second, she was one of the first Irish people in Cork that I interacted with and it made a lasting impression on me. Yes, I’m fully aware that her personality counts for a lot. But see, the following 24 hours I had a couple more friendly chats with staff, in a restaurant and several pubs. And I never allluded to myself as being a tourist. People just showed friendliness. Thirdly, after three days that hint of a smile still remained on my face. Why, thank you Cork, for such a hearty welcome. These small acts are what I enjoy carrying with me after trips, to have as memories and share as anecdotes in the future. And we might as well add a fourth observation. I take this act of friendliness with me and spread the rumour of the open and friendly attitude of the Irish.
And I wonder if such a small thing at the same time is also the greatest. After we travel around the world, we return home and meet our family and friends to talk about our travel experiences. So these small incidents become stories to tell and bring smiles to the faces of our family members and friends. And then they want to feel the same so they build up the wish to travel themselves. Time passes by and acts of kindness are experienced and shared back and forth. Slowly we start understanding each other on a very human level. We are not alone, it just seems that way. In reality we are closer to one another than we think. Europe is a pretty small place, considering the size of the planet. It’s often just a matter of showing kindness. The fact that the owner of this optician’s shop lost a few Euros when an employee gave me a free bottle of eye lense fluid, well, that’s an entirely different matter. And a tad amusing.