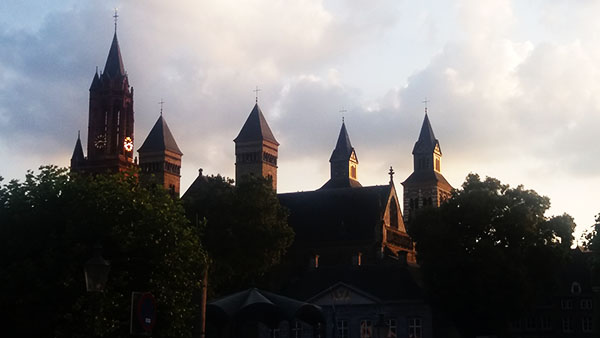 It resides in the very south of Netherlands. It is a city with remains from Roman times, it was fought over many a time during medieval and renaissance times and situated next to the river Meus it was an important trading post for so many ancient and medieval cities.
Today Maastricht has an international standing as a center for politics, a pan European treaty was signed here and the cultural life boasts cuisine and beers with influences from both France and Germany. Add to this that it is a focal point for history in Europe, with historical and art artefacts put on display and admirers of gems coming here yearly for a grand parade of the gems of the world.
Summertime in Maastricht is comparable to the summer in southeastern France, so one can expect warm weather, welcoming enough to sit outside and enjoy dinner and drinks from late spring to the beginning of autumn. This is also obviously a popular hobby, the old market in the city has several cafes and streets in the Old Town are lined with establishments with tables and chairs hugging the walls. No lack of vantage points to admire the architecture and strike up some friendly chatter with the locals.


Remains of a Roman settlement

But how did Maastricht come to be such an affluent center? And why at this particular location? The river Meuse gives us a clue. So does the proximity to several other European countries. The word crossroads come to mind. When the Romans fortified the settlement they had built in the first century A.D, there was a trading route that went to Oppidum Ubiorum, founded in 38 BC. The Romans founded Colonia next to Rhine in 50 AD and the Romans saw fit to build a bridge over Meuse in the first centure AD, in the reign of Augustus Caesar. That same bridge became an important link between Bavay in northern France and Cologne in today’s Germany. The remains of the Roman road and baths have been excavated and are still possible to see. There are even remains of Roman sculptures in today’s Maastricht, that hold vital clues to what Roman life was like back in the day. The medieval city Maastricht grew and in 1229 the gate Helport was built and with that the period of medieval might began.
The city Maastricht is now an important center for arts and education. As previously alluded to, this is where the Maastricht Treaty was signed in 1992 by the members of the European Community. That same treaty led to the creation of the euro currency.

For the language (and beer) lovers

This city presents plenty of linguistic diversity, with Dutch being the national language, but Limburgish, French, German and English used in business, education and everyday cultural life. Because of the geographical location, Maastricht has certainly earned its right to be called a multicultural center in Europe. And it is quite befitting of such a city to be the birthplace of the European Union as we know it with the Maastricht Treaty at its core. That treaty signed in 1992 that in itself is a merging of three different treaties; The European Coal and Steel Community, European Atomic Energy Community, and the Common Foreign and Security Policy.
Today Maastricht can boast with having the European headquarters for several interational companies. But wait! There was another Maastricht Treaty signed between Belgium and Netherlands in 1843. That treaty established the border between the two countries. Slightly impractical since the frontier passed through houses and had several small enclaves.

Imagine waking up in Belgium and taking a stroll to the kitchen which is in Netherlands to have your first cup of coffee. And we think we live in a time with simple border crossings thanks to the European Union!

The first crossing to the North Sea

But I digress, let’s consider the decline of the Roman empire. As previously mentioned, Maastricht was then an important trading link between today’s western Germany and northern France. To this day the remains of historical eras are still very visible. The first bridge was built by the Romans in the first century A.D. This was the first permanent river crossing to reach the North Sea. This made Maastricht an extremely important link between the cities of the Roman empire, enabling trading and moving of troops between the Roman provinces.
To travel by food and horse between the important cities Bavay and Cologne must have been quite a feat. The distance is … and surely Maastricht must have been a convenient pit stop for drinks and food. Maastricht is the right place to enjoy a platter of old Dutch cheese and a glass of Kasteel beer. So we know that one main route in the Roman empire was from Boulogne-sur-mer via Bavay and Tongres to Cologne. From the Romans to the French and later the Germans and now of course the Dutch. Nowadays the inhabitants in Maastricht is a collection of several European nationalities, with Dutch, Germans and Belgians being the largest groups (Dutch is still by far a majority). Maastricht in itself was not really enough in itself, not only was it originally the first river crossing for the Romans. It was merely a means to an end, the transport of people and goods. From the antiquity to present day Maastricht, things have certainly changed. Now a cultural and political center in Europe, it has plenty for the weekend tourist and backpacker to explore and enjoy.

We turn our attention to Aachen in the east as seen from Maastricht. Aachen has the famous three country point, a place in Europe where the borders of three countries meet, Belgium and Netherlands. This is very tangible proof of the importance of the geographical region but it also has symbolical value. The borders in this region were redrawn plenty of times and migration of people has been more expected than not so. Even back in Roman times this was a place of leisure, when the Roman spa resort Aquae Granni was founded some 100 years A.D. Say what you like about the Romans, but not only did they build roads, they made sure to get a proper wellness treatment along the way. Fast forward to medieval times and we find that Charlemagne spent many winters in the city. So the city became a focal point of western Europe as Charlemagne continued the reign of the Frankish kingdom. Up until modern times this city has been a center and place of conflict, including the tumultous 20th century.

Aachen and beyond southward