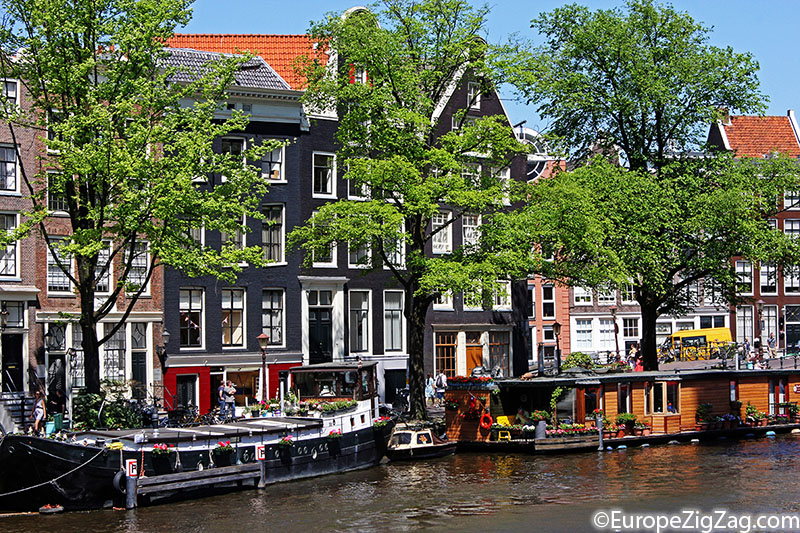 Amsterdam is known for them. Tourists flock to this city in awe of their presence. The city is called the Venice of the north because of them. We are of course talking about the canals in Amsterdam that form a semicircular pattern around the historical center. In Dutch this geometrical pattern with canals is referred to as the Grachtengordel which translates into canal belt. Seen from above this is exactly what it looks like – A belt of canals around the historical center of the city.
With the overwhelming number of canals it comes as no big surprise that there are plenty of boat tour organisers in Amsterdam. Boating in these canals is big business. But for our purposes we will focus on the smaller boats that you can rent, because with these you are in control and decide where to go and where to make pit stops for refreshments.

Highlights Along The Amsterdam Canals

You want to see the eastern and western parts of the Grachtengordel. To do so, steer away from the Prinsengracht with all its traffic and instead glide along the still waters in Amsterdam West or the Eastern Docklands. With enough time on your hands you can do a proper tour of these areas as well as the center but you need to count on at least four hours boating time.

The canal that most people in Amsterdam know of is Prinsengracht. It is one of the inner canals that stretch across the historical center, from Westerdok (“Western docks”) to the river Amstel in the east. Prinsengracht is also the most popular point from where to look at the canal parties that take place on King’s Day and The Pride Festival.
Photo

Amstel is the largest river leaving Amsterdam and it stretches from the National Opera and Ballet towards the south and Oudekerk an Amstel. This is the perfect route to follow if you want to explore the countryside and leave the canal belt in the city. Within an hour you can make your way to Ouderkerk aan de Amstel, a small village outside Amsterdam. Well there you can moor by one of the restaurants and grab a bite to eat before continuing the boating adventures.

The Red Light area offers some of the most narrow canals. You are really smack in the action with tourist crowds moving along all around you and in all directions. If you choose to go further north closer to Nieuwmarkt it is less busy although you will then see plenty of restaurants and bars that the neighbourhood has to offer.
But perhaps the most fun areas to go boating are the canals that are less known. There are plenty of them and they often traverse the Grachtengordel in a north-southerly direction, creating passages between larger canals such as Herengracht, Keizersgracht and Prinsengracht.
But don’t stop there. If you make your way to the Eastern Docklands you come across some very picturesque canals lined with residential buildings. This is the point where many start thinking about the appearantly chill atmosphere in Amsterdam and what daily life is like here. For sure, life in Amsterdam trundles along at a leisurely pace.

The canals are very busy and especially so during summer season so there are a few very important rules to follow when boating. The right-hand rule first off dictates that everyone should keep to the right hand side of the river. All tour boats take precedence in the canals so steer gently to the side when a tour boat needs to overtake you or is approaching from the opposite direction. Also take great care when passing by bridges as boats might be approaching from the side. You really want to avoid going too fast close to several bridges and tunnels as there will be little time for making adjustments when approaching boats are on a collision course with your own boat.

Where to get a boat

Sloepdelen has boats that are powered by electric engines so you can enjoy gliding around the canals in silence.
Mokum Boats has robust metal boats can take a pounding with no problem. They may not be a pretty sight but are sturdy and easy to handle.