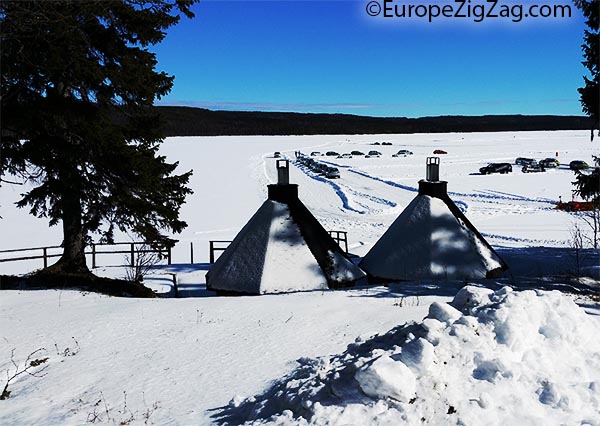 Åre is halfway up in Sweden and attracts many Swedes during winter time. Rumour has spread worldwide and nowadays internationals can be seen travelling to this laidback skiing resort in the north of the country. This is one of the Scandinavian havens for snowboarding and skiing enthusiasts and it has something to offer for those seeking fun downhill racing as well as those who want proper afterski parties.
Åre is some 350 km south of the Arctic Circle and the landscape has plenty of pine forest and lakes. In general Sweden is not a mountainous country but around this region the rolling landscape is the most prominent feature. Still the proper mountains are further north whereas the region around Åre could be described as very hilly by people with experience from mountains such as the ones in the Alps in Austria, France and Italy.
Åre is a gem for the skiing enthusiasts in the north of Sweden but also attracts Swedes from all over the country. The skiing resort has been able to retain a sense of peace and is not nearly as hectic as the skiing resorts in Austria, France, and Italy. With this being said you can look forward to a more relaxed atmosphere here.
Every year during the winter season the skiing resort fills up with winter sport enthusiasts. The pists range considerably in difficulty and the great number of pists makes it possible to vary the downhill skiing experience during a longer skiing vacation. There are no limitations to a few hand selected slopes here, that is for sure. The road up to the skiing resort is lined with skiing lodges, small and large. There are cabins for rent for smaller and larger groups which is also used by plenty of groups of students and families that choose to go here.

In total there are more than 40 lifts servicing a 100 pists. That’s right, one hundred pists to explore, one of them has a downhill run exceeding six kilometres. It is safe to say that it will take some time before you run out of new pists to try out. As if that isn’t enough you can also enjoy late evening skiing until 10 pm on a daily basis. Fortunately for those that prefer to ski more than partying, the number of slopes will help you avoid those suffering from hangover who take unsteady turns.

But wait! There is more to this place than skiing. At the Åre Lake you are able to go ice skating as well. Then there is also the snow mobiling and dog sledding that can be arranged. The reputation as an allround sporting location has grown over the years and this is probably one of the particular strengths of Åre as a winter sport destination. With the wide range of activities available you can’t really sit down and claim to have run out of new things to try out. Whether you want to go snowmobiling, ride a dog sled or try ziplining, it’s all possible. Local organisers provide these outdoor activities that do not involve going down a snowy hill with feet strapped to a snowboard or skis.

Sporty holiday or focus on after ski

As previously mentioned, Åre is more laidback than its counterpart skiing resorts in the mountains in central Europe. But for Swedes, Åre is as known for its skiing as for its party venues. Thousands of younger adults flock to the north in Sweden every winter. They are often students on vacation and you can expect some pretty fierce partying in some clubs. Thankfully for families and those looking for a more tranquil experience, these clubs are easy to avoid.

The easiest way to get there is to fly to the Stockholm and catch a connecting flight to the city Östersund. From there you can continue by bus or train to Åre. The bus ride from Östersund airport to Åre is almost one and a half hours long but let your eyes feast on the winter landscape, especially so the pine trees.
The other option is to take Snälltåget from Malmö or Stockholm and ride all the way up to Åre. It offers an amazing experience as you travel through the wintry Swedish landscape.

From November through April you can enjoy good skiing conditions. Be prepared for the coldest winter months in December and January.

Åre in Sweden is somewhat more expensive that skiing resorts in other countries. This is a well hidden skiing resort halfway up in Sweden close to a few larger cities that most foreigners have not heard of. It is a gem that offers a more laid back atmosphere than can be found in central Europe.