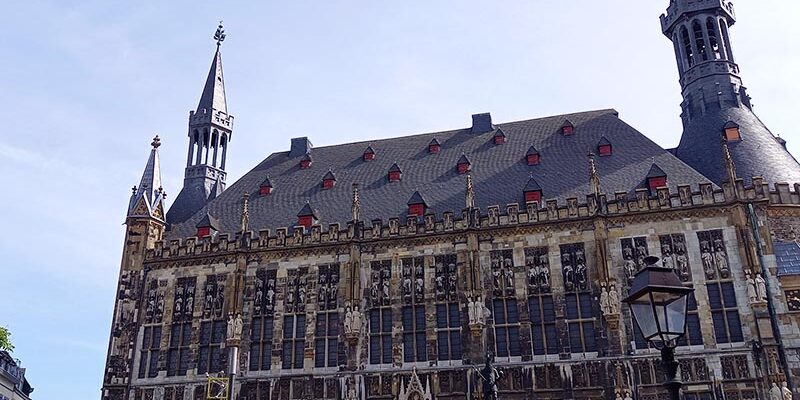 Aachen stands out by not being a hot spot for tourism in Western Europe. One could argue that this is somewhat amusing. Because Aachen is not far from Cologne, Dusseldorf, or Amsterdam, just to name a few of the more well-known cities. Historically and geographically, Aachen is a tantalizing city with an eventful history that had faded away into history books. This is in North Rhine-Westphalia, the western-most region in Germany. Close to Aachen is the Three Country Point. There you can visit the exact place where the borders of Germany, Belgium, and the Netherlands intersect. The border region has several cafes, on each side of the border, and a cute marker for where the border meets.

The fact that these three countries meet at this point is proof of the important role that Aachen has played in history. What is known is that in ancient times, Aachen was the place of a Roman settlement and bath complex (thermae). In medieval times this became the place of governing the Frankish empire. If you wonder where the Holy Roman Empire was based, suffice to say that 31 emperors were crowned in Aachen.

For the traveler, this region has plenty of medieval traces and then there is the national reserve Eifel to visit. The latter is placed suitably between Germany and Belgium, attracting thousands of outdoorsy travelers every year. Aachen was the capital of Charlemagne’s empire between 768 to 814, a long, long time ago! That was the Carolingian dynasty that is no more. That is just a taste of how diverse this region around Aachen is. If you are into historical excursions, then North Rhine-Westphalia will treat you to an abundance of exploration. Castles are strewn across the landscape next to the border between Germany and Belgium. And as if that was not enough, there are more than 1,000 museums in this most populous German region. Any art aficionado will have plenty to discover in North Rhine-Westphalia.

Ponttor & Marschiertor: The Old City Gates. These are the only two remaining gates of the original 11 gates that existed in medieval times. You can find these remaining gates at the following addresses:

Aachen itself may not have a buzzing nightlife or shopping venues that will require many hours to check out. But Aachen is an excellent and different choice for a weekend away. With the numerous spa hotels, plenty of nice downtime, and dinner out in the small unpretentious city center. But if you are keen on exploring a bit further, then head over to the medieval village of Monschau, which is to the south of Aachen.

If Aachen is small, then Monschau takes the first prize! This village is tucked away between hills and serpentine roads in the Eifel region, the natural reserve. It has a castle perched on the hill above the village. The 13th-century castle combined with the narrow streets and timber-frame houses in the village will surely help your imagination. It is a place that reminds me of lost times. The half-timbered houses here are typical for medieval times. The ones you can see in Monschau have been practically untouched for more than two centuries. That is a thought worth holding onto as you walk down the narrow streets with your camera. If you want to bring your camera to capture narrow streets of two centuries past in a German village, you have a good opportunity to do so in Monschau.

You can easily spend a day in Monschau taking in the sights and trying out the restaurants and cafes. If you are very keen on a calm escape that even makes Aachen look like a big city, then stay overnight in one of the hotels along the street.

The village is small enough to explore fully in a day, but not so small as to run out of stunning views and little cafes and restaurants. That being said, visit Monschau with a mindset of peace and calm, with your camera ready. Monschau is suitable for a solo visit as well as with a friend. To get here, either take a bus from Aachen or go by car. The village has a conveniently placed parking garage, just where the old village street begins. And that is where your adventure into the visible traces of medieval Monschau can begin.