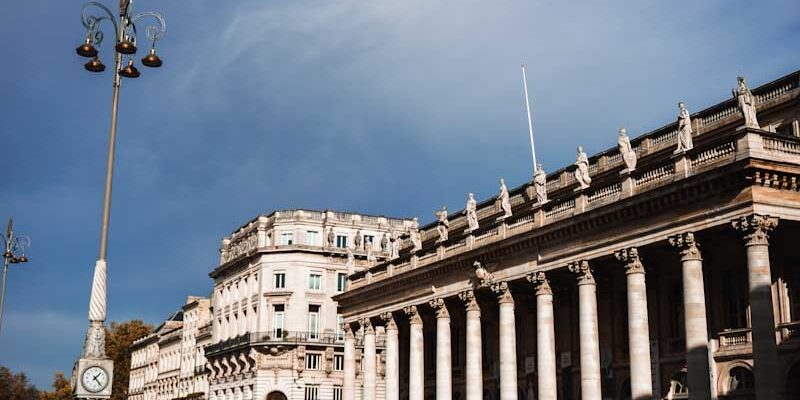 Bordeaux is known for its wine production. But that is the entire region of Bordeaux. However, the city of Bordeaux has a blend of cultural influences that makes the city an excellent place to visit.

I start my exploration at the Grand Theatre of Bordeaux, the opera that was ready for the world to see in 1780. This building with neoclassical ingredients serves as a stunning starting point. And it also has streets leading in all directions, downward towards the river Garonne, and around the entire city centre. Simply put, wherever you choose to go, there is something to see or do.

Escaping the shopping for a taste of what was

As I stroll down the shopping street Rue Saint-Catherine from the Grant Theatre of Bordeaux, I cannot wait to leave it and come across some of the older parts of the city.

It turns out that the older alleys and buildings are conveniently spaced out in the centre of Bordeaux. There is not one little Old Town as can be seen in so many European cities. Instead I am surprised by little finds all around the city, buildings which architecture stretches back to pre-Bonaparte years. Add to that alleys which still do not seem to have been afflicted by modern city planning. They are narrow at times, often straight and leading from one larger modern street to another. But the cobblestone alleyways and the towering old houses sprinkled in the city centre creates an atmosphere that is authentic for Bordeaux.

Yes, the French food with heavy sauces and savory pastries are to be found in Bordeaux. The grilled duck breast (Le magret de canard grillé) and Porcini mushrooms in parsley are both favourites. Additionally the pastry Canelé which is flavoured with vanilla and rum is awkwardly tasty.  This small cylinder-shaped delight is a typical specialty of the Bordeaux region. You cannot enjoy Bordeaux to the fullest without sampling the foods that are so closely associated with the entire region. Do note how I left out the wine, as that is the worldwide known Merlot, Cabernet Sauvignon and Cabernet Franc. In total there are five chateuax that are known for the premier cru classes (first growths). If you are a wine enthusiast, then Bordeaux should hold very few secrets in the world of wine tasting.

From Celtic times all the way to today’s France

As any obedient tourist, I take the path to the river Garonne to see the palace and the waterfront. It is also there that I am enlightened by the grand views. If I juxtapose this view with the huddled, sometimes chaotic, views within the city centre, I find it to be a convenient mix of the cute and the grandiose that Bordeaux manages to pull off in style.

The city Bordeaux was founded by Celts as far back as around 300 BC. It was known Burdigala. Fast forward about 400 years and the Romans came to stay. It was in these times that the city developed a commercial centre. Bordeaux has seen a lot and many come and go. Vandals arrived on the scene to spoil the region, as did the Visigoths. So I see the remarkable history that this city has had. Over the centuries much has happened, and many have passed through. Onto the 12th through the 15th centuries, when the English due to a convenient marriage exerted influence and created a tax-free trade with Bordeaux. This led to the fascination in the English lands by the wines and cloths from Bordeaux. When Bordeaux again became part of France after 1453, the rest, as they say, is history.

The marine climate in Bordeaux offers fairly warm weather most of the months of the year. As a matter of fact, during my visit in late November, I enjoyed a few days of strong sunshine and warm enough weather to wear shorts and a shirt outside.

After Bordeaux.. More of Bordeaux, the region

So where does one continue exploring after having wandered the streets in the city Bordeaux? This, I wonder, after been told of a number of cutesy small towns closeby. For anyone wanting a richer taste of the region Bordaux, Saint-Emilion seems like a promising choise.

Saint-Emilion for a taste of the Bordeaux region

To the east lies Saint-Emilion in the Libournais district. Some 30 odd kilometers away. This also makes it a reasonable bicycling distance. It is a world heritage and has visibly medieval remains. Now, what would a town in Bordeaux be without its association with wine. It turns out that Saint-Emilion is also known for mostly the Merlot-Cabernet Franc duet, which is a prestigious variant. In 1999 the town became the first vineyard became an item on the UNESCO World Heritage List. You guessed it, it was Saint-Emilion. The town is also conveniently placed for a bike ride from the city Bordeaux in summer-time. Something to keep in mind for bikepacking enthusiasts and those ready to muster up the strength to thoroughly explore the region Bordeaux, to add to their rich experience from the city of Bordeaux.

With this being said, I will save the bike trip and the wine tasting as a treat for summer time, à bientôt, Bordeaux!

More inspiration for your France trip!

See castles and the Camargue region in the south of France.

Seven national parks in France you have to see.

By Paul-Christian Markovski, for EuropeZigZag.com.