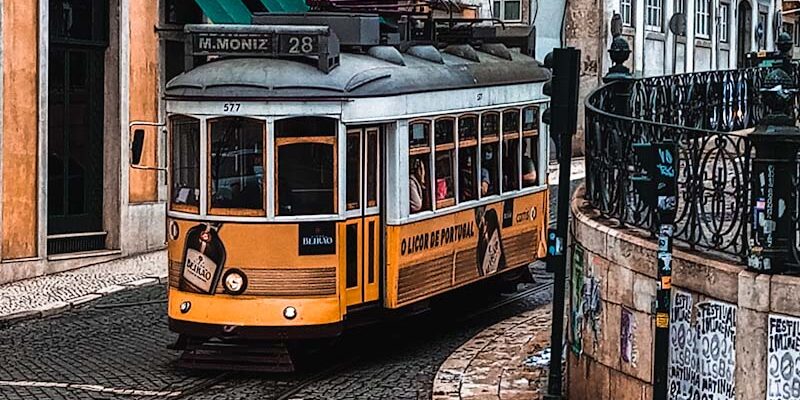 Lisbon is placed on seven hills and I choose five of the districts among these to do my photography bonanza. The difference in altitude ranges greatly in the city and this is apparent when walking and up and down hills throughout the city. My passion for photography could not get a better city to explore angles and historical architecture. Add the cobblestone streets and old trams that hobble around the city. Also, I have a scene for photography that allows for a lot of experimentation.

The seafood restaurants and the appeal of food – everywhere

Wherever I turn my gaze in Lisbon, seafood restaurants are in abundance. The fish import in the country is strong with the Atlantic coastline forming the western border of the Portugal. In the district Chiado close to the square Praça do Comércio, it is easy to find seafood restaurants on the shopping streets. Terraces abound in the center of the pedestrian streets. The traffic is not too noticeable and you easily feel as if the city is meant for walking. The Bairro Alto and Alfama districts next to the square give a taste of what Lisbon’s cuisine has to offer. Just north of the Alfama district is also where the castle Castelo de S. Jorge can be found, which remains the most visible landmark seen from far away.

Stunning architecture born out of a disaster

Take in the local atmosphere as you walk down the streets in central Lisbon, such as Alfama known for its Fado music, Baixa, Mouraria (the Moorish Quarter that also has live Fado performances), and São Vicente with the Church of São Vicente de Fora. Make sure to look up and to the sides to feast on the tiled facades that the houses in Lisbon are known for. You will see these particularly ornamented walls of buildings The streets have their own distinct tile patterns that depends on the district you are in.

The history behind this architectural feat that is omnipresent in Lisbon is touching and not altogether happy. An earthquake struck the city in 1755. It did so with force. On 1st November that year. Consequently the earthquake occurred that had an estimated force beyond 8 on the Richter scale. After the event more than 90% of the buildings in the city had collapsed because of the earthquake. Moreover, parts of the city had been flooded due to the tsunami that followed. At that time Lisbon lost its royal library that had 70,000 volumes. The city was then rebuilt within a month with a more earthquake-proof architecture. The foundations of buildings were made with wood so as to allow shaking but not tearing and falling down.

The view of the sea

From the Lady of Our Hill at Miradouro da Senhora do Monte, the city unfolds below as a carpet of rooftops. This is the highest point in Lisbon and to the left the fortress looms over the city. The fortress stands in-between the hill and the sea. Everywhere I look. Moreover, houses are spread out below. With the accompanying guitar and drums music by the street musicians, the scene is set with for sauntering around and taking in the visual delights of the architecture as well as music.

Sintra with its palaces and parks

Sintra is a town on the Portuguese Rivierera on the western coast, not far from the Atlantic Ocean. It is simple to combine a visit to Sintra from Lisbon, with the direct trains that go there from the Rossio railway station in Lisbon. Its architectural style from the late 19th century is easily recognized on the square. Sintra is only about 40 minutes away with train and well there, a 15 minute walk takes me into the historic neighbourhood in the town. You might prefer the train as there are regular departures during day and the unpredictable nature of street traffic jams if taking a bus, can be avoided. The Pena Palace in Sintra sits perched on a cliffside and stuns with its blend of architectural disciplines. The palace was built in the 18th century and as was popular in those early decades of the century. It mixes Moorish and Renaissance architectural styles.

Juxtaposed with the Pena Palace is the Castle of the Moors that is much older and that was enlarged after the Reconquista. This castle is probably more in line with what one would expect of a castle, seeing how it was built for a functional purpose.

A visit to the Park and Palace of Monserrate is a welcome change to the city life in Lisbon. Montserrate is in a mountain range and the park not altogether structured. High above on a hill the palace stands over the surrounding grassland and trees that cover the grounds. This is a great way to take a break from Sintra’s barrage of colours and the hectic city life in Lisbon.

Lisbon in Portugal may be one of the westwardly cities you can find in mainland Europe, and it surprises with so much to explore. Combine the seafood with the views and winding streets that go up and down in Lisbon. Continue by mixing it up with the palace and park in Sintra and you have a near-perfect mix of relaxed fun.