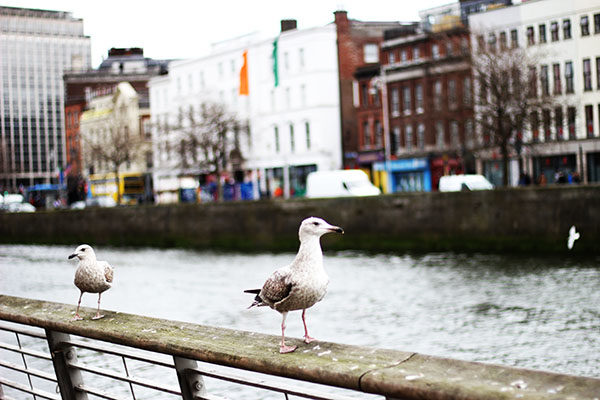 It’s the Monday before St. Paddy’s Day in Dublin. Preparations are underway for the weekend’s festivities and I plant myself at the bar in Temple Bar in what can be described as the tourist central of the city. Well there I spark up a conversation with a Mexican girl who is working as a bartender. With her six years in Dublin she tells me about the craic that happens during the festival. With a pint of Carrig Lager in my hand we digress to the topic of the Irish pub culture all over the world. A pub is a pub is a pub, right? Well not really, she claims. She describes how young and old, singles and couples, as well as families, can be seen in the pubs in Dublin. Families are mostly seen in the working week whereas stag and hen parties happens in the weekends. She is excited for the coming St. Paddy’s Day although her colleague bursts out laughing mentioning he’s not that excited at all about the prospect of thousands of tourists storming the bar. It turns out that he’s the one that is in charge of carrying all the beer kegs into the bar. I raise my glass in sympathy for the poor fellow. Plenty of beer will be drunk this weekend. I glance over to the stacked kegs by the wall.

The girl and guy bartenders comment on how welcoming the Irish are. This is even more entertaining as they both work in the pub and neither is Irish, and I, well I’m just a temporary visitor among thousands of others. The impression seems to be a common one. Irish people are easy to banter with and they have a great feeling for small puns and upbeat remarks even in the shortest of conversations. I can only agree with regards to the Irish hospitality as the last 72 hours have seen my striking up conversations with locals in Dublin left and right.

The female bartender also mentions how the tourism is influenced by the cruise ships that arrive in Dublin from March to October, just as St. Patrick’s Day is held. As the ships dock, people in the thousands make landfall in the city and storm the pubs for a taste of what Dublin is known for – Its pub culture. It must get pretty hectic here in the summer months. To this she simply rolls her eyes in confirmation. Dublin is “crazy busy in summer” as she puts it.

Temple Bar is the epicentre in the tourist area. But around it lies other cozy streets and bars. The classic entrance to the Temple Bar area from the Riverside Liffey through Merchant’s Arch.

Every year before St. Patrick’s Day, beer kegs in the thousands are delivered to the bars in city. You don’t want to let your guests get thirsty. Most tourists walk into the Temple Bar area and stay there for the remainder of festivities.

This festival is a young one. First held in 1996 in the beginning it would take closer to half a year to prepare for the St. Patrick’s Festival, but nowadays it takes an incredible 18 months to prepare the city for the festivities. So that means that while one festival is given, the next one is already being prepared!


As I make my way through the winding alleys in the Temple Bar neighbourhood, I think of the hundreds of thousands of international visitors that have come here for St. Patrick’s Day over the years. Surely it must have left some impressions on the people working in the bars.

In the Auld Dubliner I find out from a fairly stressed bartender in his midtwenties that the entire Temple Bar area is locked down during the festivities. He mentions “It’s 50 people leave, 50 people get in, mate.” This is a good example of the tourism industry’s impact on a festivity that used to be of local interest but has grown to an international event.

To find out more, I speak with staff at StPatricksFestival.ie. They mention some staggering numbers for 2016. “There were over 105,000 out-of-state visitors at the Festival in 2016, spending an average of 8.8 days in Ireland, and 6.5 days in Dublin.” This research comes from Behaviour and Attitudes on behalf of Fáilte Ireland.

I’m in luck with the weather during my stay. The sun is shining and the temperatures rise so much that there’s no need for a warm jacket. With such weather the River Liffey makes for a pleasant vista to rest your gaze on. The river has plenty of boardwalks alongside, with benches strategically placed to allow for some sitting and gazing at the sun.

I spend most of my time in the Temple Bar area observing the growing numbers of tourists that enter and exit bars and the fervous of the bar staff as they are stocking up on full beer kegs. Whereas many will focus their attention on Temple Bar for a mere few hours, mots of the night holding and sipping pints of beer, I make the most of the daylight hours these days before St. Patrick’s Day. My quest is a simple one – What are the preparations for St. Patrick’s Day and what fun stories do these cobblestone streets and the locals have from past years’ craic. And across the river, the locals are walking through the smaller alleys to and from work. In many ways, daily life continues like always even just a day before St. Patrick’s Day. The cobblestone alleys and rickety buildings add to the atmosphere. It certainly feels like it has been around for ages.

Temple Bar area changes character from day to night. During day people saunter around with their cameras, getting photos of themselves in front of store windows, sometimes even inside by the counters. The coziness of this city is known by pretty much by every visitor. But at night the area changes appearance. Neon lights flicker on and the warm lights from the bars beckon to thirsty people to come in and enjoy a pint. Or two, or three. Yes, at night this area is a haven for the partygoer and I find out from several bartenders and some cafe staff that if they would not be working they would try to stay away from the area. Such is the wonderful nuisance of being a popular tourist resort.

I leave on St. Patrick’s Day itself. Streets are to be blocked off for the parade in the morning and as I make myself to the taxi early at dawn I’m already greeted by groups of people dressed in green. I’m happy to be leaving before the festivities, as I don’t want to tarnish my experiences with daily life in Dublin, odd chats with staff before the partying as well as walking down streets along the locals, trying to get a glimpse into the daily life of the Dubliner.

Cultural fun in and around Dublin!

Dublin is one of those cities in Europe that has earned its reputation as a funloving place with plenty of exciting nightlife. But Ireland is also known for its breathtaking nature. During my four day visit I tried to create a healthy mix of the city’s buzz as well as experiencing the nature around.

Wander off from the Temple Bar area

Avoid the museums for a day out in the spring weather in Dublin. The River Liffey functions well as a backdrop for your selfies and party photos as you are on your bar crawl through the city. When you are done with the Temple Bar area, be sure to wander off in a direction where there are less tourists and you can meet some Irish people in their normal hangouts. This is after all Ireland and the capital has hundreds upon hundreds of bars to sample local craft beers in. Yes, the Temple Bar has been opening its doors to thirsty people since 1840 and deserves a visit. But there’s plenty more to the pub culture in Dublin than this fine establishment.

One extra perspective of Dublin is that of outside the city itself. You read it right. Leave town to understand this city and sample the local culture, food and drink and social life even more. To to this, check out the seaside villages, such as Howth.