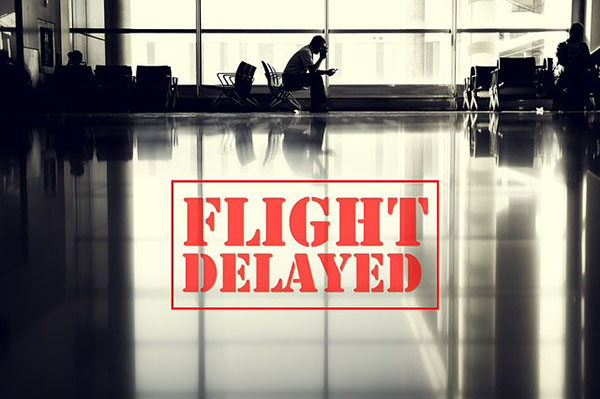 I sit down with Rob, a congenial English man who lives in Amsterdam in The Netherlands. The topic is a flight that became delayed and the aspect of travelling by rail as a viable option. The experience serves as an illustration of the differences between travelling by rail and plane. Both have their benefits.

Paul: You had a bit of an issue when you came back from the UK by plane?

Rob: Yes [sighing] that was a catalogue of errors all day basically. I was just about to leave my dad’s. Got an email and a text 15 minutes before the taxi, saying the flight has been delayed. I was ready to go to the airport, fully packed. I said to myself, I’ve been here before, I know what’s going to happen, it’s continually going to get later and later. I was due to leave at midday and got the text message at 11:45. And the text said “Please wait so we can rebook you on the next flight”, however I couldn’t get the next flight but I booked one for 2.5 hours later.

R: So in one way it was good, but the European laws say that if the flight is more than three hours delayed, you can claim compensation. They obviously got around this one since I was on a flight 2.5 hours later. I got to the airport two hours later than I should have.

P: But then you were still not sure whether you would take off with the next flight?

P: And you didn’t get any information from the customer service?

R: No, I could have walked to the service desk, but I thought to myself, I’ve flown so much in my life that I know exactly what will happen. To be fair, it said in the original email, we will give you a food voucher. So I could have claimed some food. But I was still at my dad’s so I could just hang around there instead of sitting in an airport.

P: So when did you actually take off?

P: But then there’s also the stress involved?

R: Yeah, it’s just the annoyance, because I booked the flight thinking I would have my evening. I always like having my evening to chill. So I deliberately booked an afternoon flight so that I could have the evening here at home and chill out. But by the time I walked through the door at 21:30, had crappy takeaway food at about 22:00. So there was no relaxation in the evening. So that was the annoyance of it.

P: Did you get any email apologizing for the delay?

R: Only at the time and it said I would hear from them within the next couple of weeks. But I did speak to one of the air hostesses and the flight had come from Madrid to pick us up in London.

P: So you had compounding delays essentially? If you have a delay in the beginning of the schedule, it will compound until when and where you are supposed to take off. How much was your ticket?

R: About 180 Euro for the return ticket. This had been booked for quite a while. The flight itself is about an hour. It’s not the flight, it’s the time that’s the issue.

P: Did you know that going by train from St. Pancras in London to Amsterdam, takes about four hours?

P: I suppose that doesn’t make you feel better now, does it? :)

P: So I just checked for train tickets from London to Amsterdam, three weeks in advance, and found a single ticket for 120 odd Euros. Think that’s reasonable and also considering one has to buy so much in advance?

R: I will definitely be comparing train/air travel prices when the Train Cross Rail Line fully opens in the UK next year as I can get to a train station near my Dad’s in half the time from London compared to what it is now. We also got stuck in rush hour traffic so the drive to the airport was over an hour.

P: So how much time did you spend in total, there and back?

R: Three hours there, and then back around three hours, so in total six hours for a 45 minute flight.

P: And on a train you can walk to the buffet car as well. So you have the time aspect and the incurred stress of waiting due to delays. Would you consider going by train another time?

R: Yes, as I said above once the Cross Rail Line fully opens then it will be very similar door to door timings to travel by rail or air. 2020 will probably see me taking the train a lot more.

“Waiting on the world to change”… Bring on the music!

I say thanks to Rob for the chat about his travel experience. And to bring some sunshine to all travellers out there, let’s have some music, in the name of waiting..

( John Mayer’s official music video for ‘Waiting On The World To Change’.)